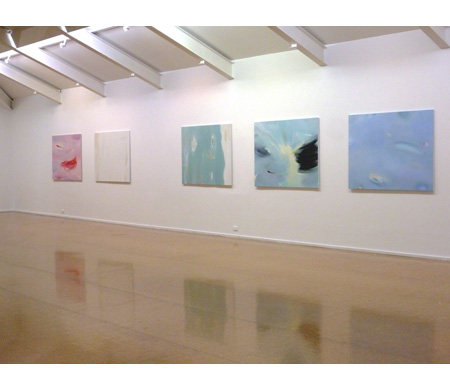 Growing out of time spent on the Heron Island Research Station and on South Bruny Island in Tasmania, paintings in Spacious explore the elusive qualities of the sea - its vastness, dynamism and strange peace. They create feelings of openness and fluidity and suggest correlations between the forms and inner actions of the deep sea and far space.
Drift crosses several boundaries, ... roving through the territory of story, metaphor and myth (Nada and the Whale) and the realm of abstraction where the formal and aesthetic qualities carry the experiential load directly, in and of themselves (the Sea paintings)
The thread that weaves through and unites them all is the sense of endless kinetic interaction between material and immaterial force.
Micky Allan, 2011

Three Sea Views
When Micky Allan returned to Botany Bay in 2010, 30 years after her series Botany Bay Today (1980), it was with her partner and collaborator Steenus von Steensen. In terms of sensibility, her single viewing platform had changed as much, if not more, than the Bay itself.

Allan and von Steensen had gone to Botany with the intention responding to changes over 30 years, but not in a traditional documentary manner. In fact they note that " ... in some ways everything appears 'exactly the same only more so', both in relation to the level of industrialisation and people living their lives regardless Đ everything seems intensified." (1) In a timeless study that concentrates on the forces of transformation with warmth and colourful enthusiasm, Allan and von Steensen take a panoramic view that is identified with both the human and natural forces that have shaped the changing environment.

Presented in two rows of colour photographs, Allan and von Steensen reveal aspects of their collaborative journey through Botany Bay. The site where Captain Cook met the original Indigenous inhabitants of Sydney in 1770, it is a significant location in Australian history and everywhere they find contradiction: ancient and recent, beauty and degradation, smart and daggy, familiar and strange. Even their medium is contradictory, a series of photographs that attempt to complicate notions of factual "reality". With the occasional assistance of paint or glitter they generate a profound vision with unassuming works that characterise the elemental magic that animates Botany Bay in all lights.

In the (wide) open space of the Main gallery the intense focus of photography is unravelled via a series of paintings that Allan links to her time in residence on Heron Island where she spent much of her time underwater. Again Allan avoids the literal for an approach that reflects her experience of submergence in a new and fluid world. In paint there are traces of her encounters with marine life but they are condensed abstract forms detectable by a sense of fleeting presence.

Allan also cites a display in the Melbourne Museum presenting moving images of the elegant creatures that inhabit depths never before explored. For Allan this proves to be an inspirational space where movement is unrestricted, a space that is like Space. In these gravity free zones, awe becomes the driving force for paintings that deal with the increasing accessibility of previously inaccessible spaces: deep sea and deep space. But this is no space of fear and Allan evokes Bachelard's "intimate immensity" in which the vast becomes a poetic space of meditation, a "philosophical space of daydream".

In Nada and the Whale Allan appropriates the story of Jonah and imbues it with a distinctive personal perspective. Consisting of a grid of small paintings/collages Allan explores the idea of a universal mythic journey that continues to have contemporary relevance. In the original story, Jonah, who attempted to evade God's instruct was swallowed by a whale (at the Lord's behest) and over the three days spent in the belly of the beast he was able to reflect upon his personal course without distraction. Disgorged onto land, Jonah was a changed (self actualised) man and today psychologists speak of the Jonah Complex or the common fear of realising one's potential. Allan presents her story as a non-linear reading that is more concerned with rhythmic flows in life than narrative structure. Allan's approach in which the story is stripped of the conventions of grand import might be seen as part of the "Jonah Problem". However, Nada and the Whale is a penetrating, even heroic deliberation on the unpredictable cycles of life that when effectively considered open the way to a dynamic growth of consciousness.

Sea
Nada and the Whale, also called Micky and the Whale shown in its entirety at Spacious
Botany Bay 2010 was shown in conjunction with Spacious