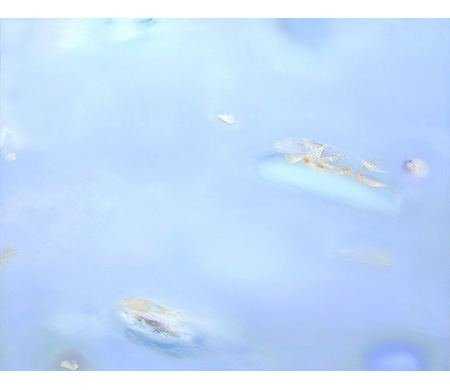 This exhibition engages with the 'liquid space' of the sea on many levels and in many moods, embracing its complexity and flux, but generating nevertheless a sense of vastness and the poetic whole. A loose leitmotif is the sea as a space of transformation and hope. The exhibition was for a Doctorate of Philosophy in Painting at the Australian National University.
Micky Allan 2013

Micky Allan's show Sea at the ANU School of Art Gallery is, appropriately, very like one of the sea creatures she might represent in her work—a whale or perhaps a dolphin—at once delicate and powerful. Beneath its shining skin it is a very muscular beast indeed.

It's a big show and covers a lot of ground, with works ranging from large canvases in oil and acrylic, to engravings on glass over mixed media drawings, smaller drawn works and projected animations. Despite this, it's an exhibition with a very coherent voice, with no work sitting uncomfortably against any other. This is due partly to the very considered curatorial efforts of the artist and partly to the intensity of focus that's clearly gone into the works' production. One could describe the overall effect as a meditation on a theme spoken in several languages. The works range from the representational—mainly in the smaller images—to the abstract with great deftness.

Allan uses a fantastic variety of media in these works. Glass beads, glitter, opalescent paints, and gold leaf and powder are mixed with more traditional media. It's a show both striking and very contemporary in its unapologetic use of shiny things, and yet never approaches the kitsch. These works are built of stern stuff, with a presence beyond their initial sheen that captivates the viewer.

One of the things I most enjoyed about this show was the colour—at once brilliant, bold and perfectly considered. There is an exquisite tension between shades and tones of a single colour in some of these works—Light blue sea is a good example of this, a work with a delicate and beautifully-crafted surface over a powerful scaffolding of colour shifts. Other works that mingle this delicacy with a strong undertow of colour-as-structure are Emerald and white sea, Abyssal sea, Mercurial sea and Celadon Sea.

Allan's mark-making is spot on. Passages of polished tone are interrupted by complex moments of texture and colour. They give the same sense of tactile satisfaction one gets from some of Fred Williams' work—little knots of luscious paint like jewels that anchor the composition. Her smaller works, like Sea (transparency) and Sea (whales), are breathier, less solidly worked with lighter media, and more invitational than imposing —encouraging a close-up inspection and a much more verbal interaction with their subject matter, due to their more narrative content. In some of these works there's a gentle whimsy that reconnects the viewer to a human scale after the vast perspectives of the larger canvases.

Allan spent time at various locations by the sea—including Cape Leveque, Bruny Island and Heron Island—researching and developing these works, and the depth and breadth of her investigation shows. Their complex materiality is matched by the sense she manages to impart in them of her conceptual process—ocean as micro and macro, both finite and infinite; ocean as a metaphor for the universe and time, eternal and yet eternally changing.

It's a wonderful thing when someone's intention coincides so completely with what's delivered. This is a balanced, profound body of work. Much contemporary art shuns the polished and the crafted for awkwardness with a brash disregard for technical skill. While some examples of such art certainly have their own merit, it's refreshing and inspiring to see work that combines a depth of intent with its sheer skill of delivery. The impact of such a combination is one you don't easily forget, and I'm sure I'll be thinking of Sea for some time to come. I can't wait to see where Allan goes next.

The exegesis 'LIQUID SPACE': A Visual Investigation of the Sea as an Emperical, Experiential and Metaphoric Space will be available online at some stage through the Australian National University.