Current and upcoming events
Most currently, a new media work Micky and the Whale, made with Steenus von Steensen as an adventure into new territory, is a finalist in the 2013 Blake Prize. Based on 75 small water colour and collage works built up over many years, it includes text and animation. Quirky and at times humorous, Micky and the Whale brings a contemporary flavour to the old biblical narrative of Jonah and the whale and the story of symbolic death and renewal at its heart.

Two of my earliest engraved glass pieces, originally exhibited in Quietly, Infinity in the Everyday at Helen Maxwell Gallery in 2005, are presently on show at the Canberra Museum and Art Gallery as part of their their vast exhibition 2013: A Canberra Odyssey, which covers the way Canberra has been imaged in the past and in the present and (speculatively) how it might be in the future. In Night I and Night III long panels of white/green engraved glass, hung over dark drawings, had something of this futuristic feel.

Three other engraved glass works recently purchased by the Australian National Gallery are presently on display in the contemporary Australian art section.

Recent events
Most recent has been the exhibition Sea, held in mid June 2013 as a culmination of the last four years during which my major focus has been on completing a Doctorate of Philosophy in Painting at the Australian National University, Canberra. My exploration was into the many levels of the sea and the complex processes of fluidity, transformation and change the sea embodies. My challenge was to portray the sea's ethereal vastness and lively detail without there being a sense of contradiction.

The written Exegesis accompanying my exhibition, called 'Liquid space': a visual investigation of the sea as an empirical, experiential and metaphoric space', strove to blend the analytic and the poetic and to explore parallels between the sea and the nature of the creative process. As soon as results are finalised a link will be made so that those who might be interested can read this material.

Studies for my PhD involved several field trips which fed very directly into the work and allowed me to experience various Australian seas. I went to Cape Leveque on the Dampier Peninsula north of Broome (Sea Days, Sea Nights), to Heron Island on the Great Barrier Reef and to Bruny Island on the southern tip of Tasmania (Sea). 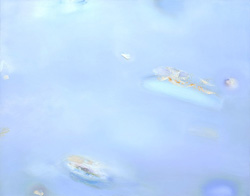 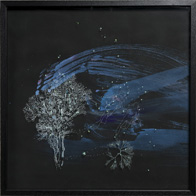 Another recent event relates to what seems to be a resurgence of interest in the 80's and, in my case, to the early hand-painted photographs made in the late 70's and early 80's. Kyla McFarlane's A Different Temporality: Aspects of Australian Feminist Art Practice 1975-198 at Monash University Museum of Art in Melbourne exemplifies this trend (My Trip, 1985 and Citizens of Elizabeth 1982). So also does the inclusion of the original photographic series Botany Bay Today 1980 in the recent exhibition Mix Tape 1980's: Appropriation, Subculture, Critical Style at the Ian Potter Centre, NGV Australia at Federation Square, Melbourne.

Of note has been the growth of collaborative work with Steenus von Steensen in which we combine photography and original art work in digital prints, with some hand colouring and occasional engraved glass overlays. I look forward to seeing where this leads in the future. 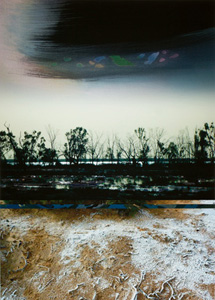 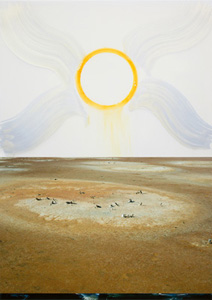 Articles
Art Monthly Australia (Issue #241, July 2011) had an article by Melinda Hinkson called Micky Allan at CCAS about my solo show at Canberra Contemporary Art Space at Gorman House in 2011.