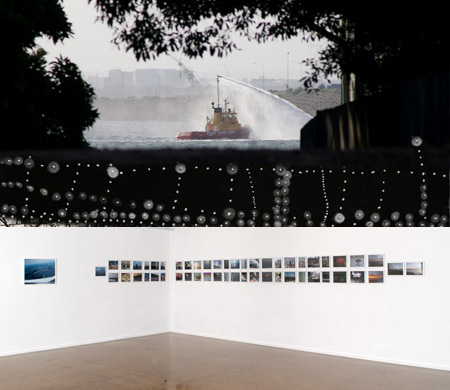 Botany Bay today is a meeting place of many historical, industrial, social and ecological forces, some harmonious, many not. We have tried to evoke this complex mix while suggesting that the power of deep time lies within this, strangely, or at least potentially, unifying conflict.
Micky Allan and Steenus von Steensen, 2010

In March 2009 Micky and I had begun a project involving Botany Bay as a follow-up to the old 1980 series. Later that year Micky was approached by Ace Burke who wanted to include the original 1980 series in a planned exhibition on the Botany Bay area at Hazelhurst Regional Gallery in 2010. We mentioned we had started work on a new series. Ace, as well as co-curator Anna Lawrenson were very interested, particularly about the the relationship between the original series from 1980 and the new work. Originally we had thought of a format somewhat similar to the Fall of Night series from 2008, but we settled for a smaller more intimate one playing on the many parallels (and differences) to the old 1980 series. We had a 2 week residency at Hazelhurst in June 2010 and our work was progressing well. The loan of the old series from the National Gallery of Victoria was finally approved and the show Shifting Sands, Botany Bay Today in August and September 2010 showed the 2 series next to each other.

In April 2011 Botany Bay 2010 was also shown at Canberra Contemporary Art Space, curated by David Broker and complementing Micky's exhibition Spacious which was shown there at the same time.

Comparing today's Botany Bay with how it was 30 years ago, in some ways everything appears 'exactly the same only more so', both in relation to the level of industrialisation and people living their lives regardless - everything seems intensified.

Botany Bay is still the site where the first European set foot on Australian soil, but the stone plaque with the extract from Captain Cook's journal, stating that "the natives resolutely disputed the landing", seems mysteriously to have disappeared.

There are still the same dangers of planes crashing into petrochemical plants and of major oil spills causing ecological disaster. Thundering trucks still rush around. The proposed new Sydney Airport has been put on the backburner leaving the present airport extending further into the Bay and carrying increased air traffic. Everywhere you look, all over the bay, at all times, there are planes. Port Botany has grown and the new desalination plant exists. ICI is now called Orica and erects warning signs that the Penrhyn Estuary is contaminated with industrial pollutants, Long Bay Prison has been expanded and sand mining continues.

Nevertheless, there is also a decidedly 'magical' quality present that transforms what was bleak and drab in the 80's. Colour seems not only apt, but essential to portray it. Botany Bay is now a major recreational area with beautiful beaches, fabulous views and park areas filled with people fishing, picnicking, exercising, swimming, taking an evening stroll. People's use of the bay is much livelier, their enjoyment of nature more obvious and their use of the new foreshore more communal. The whole area is clearly more prosperous, more frequented, more used. Some of this seems to be the naturally unfolding prosperity of the multicultural population present in the 80's, and some due to 'outside' pressure of development and gentrification.

We have tried to suggest the complex mix of forces that is the present Botany Bay.

A wide range of tensions exists: between the fashionable and non-fashionable, the local and non-local, the spectacularly beautiful and the polluted or harsh. There is increased tension on the Kurnell Peninsula regarding closure of beaches and the destruction of an old way of life through development. Nevertheless a warm and somewhat 'homey' beauty permeates the bay and the way people use it. For some it seems to be a place of solace, for some entertainment, for some 'just life'. The nightly drama of port, city and runway lights glistening in the sea are undeniably spectacular, just far away from many vantage points for the noise not to be oppressive. In the middle of it all migratory birds still come and go.

We have combined photographs, photographs of our own paintings and drawing, hand-painted photographs and (sparsely) engraved glass. We have used the principle of collage and unexpected juxta-positioning to convey something of the variety, pressure and visual dazzle of this paradoxical and unique place as it exists today in the ebb and flow of tides, days and nights and seasonal shifts.