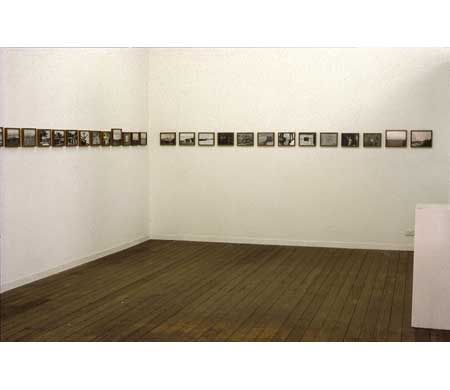 Her experience of places like ... Botany Bay in Sydney were documented to reveal the process of degeneration, counterpointing for instance the delicate detail of a wildflower with the gross coastal devastation of man-made pollution and throughout, juxtaposing images of air and water.

Botany Bay is the site of James Cook's landing in Australia. He named it Botany Bay because of the abundant flora. Today Long Bay Prison is on the bay itself near the northern headland, not far inland from two or three streets of Aboriginal Reserve. You can see the cemetery from here. Behind it stands the Caltex Oil Refinery. Just around the corner is the giant Port Botany Development which overloads the surrounding narrow residential streets with oil (and other) transportation trucks and provides a serious fire and explosion hazard. Its chemical storage complex adds to the already present and expanding Imperial Chemical Industries (ici) plant, just inland. According to it's 1979 annual report, there had been only two or three accidental emissions of unlawful fumes into the atmosphere the previous year. Kellogg's food factory is a couple or so blocks away.

Next is Kingsford Smith Airport, with its noise and air pollution. The proposals for its expansion would take the runway further into the bay and very close to the Port. A plane crashing into the Port, the ici complex, or the refinery could cause explosion and unmanageable fire perhaps in all three installations. Opinions differ on the capacity of available facilities to stop such a conflagration spreading.

Past the Airport is a long stretch of beach where people picnic, play, swim and watch the ships pass in through the heads. The five larger photographs in the series are taken from this central point. Just on round the bay, the Captain Cook Bridge sails across the water to linkup with the Kurnell Peninsula. On this peninsula there are sand excavation works and the Kurnell Oil Refinery which is also expanding. Marine biologists had pointed out that the ecology of the bay could not withstand further oil spills, yet there had been a spill at Kurnell shortly before I began photographing, and another, from the ship World Encouragement, during the six months I was taking photographs. A few minutes walk up the beach from where these spills occurred there is a monument marking the spot where James Cook stepped ashore, and the James Cook Memorial Park.

All around the bay people fish, swim, shop, hurry home. In the photographs there is evidence of lives led regardless.

At the time, I tried to portray all this information visually, with only a map and short titles to supplement the images.

Despite the nature of the material, I did not want the work to be declamatory. Size became crucial. It was tempting to produce large and dramatic photographs and play up the 'see how dreadful it is' approach. I wanted something more subtle, not without delicacy The continuum of people living their lives with some vigour or at least resilience. The small size of the images, the hand colouring of the flowers were all intended to complicate matters.

Some people have been extremely irritated by the scale of the photographs. But to make them large would have linked them for me with something of the kind of energy that helped formulate the whole concentration of dangerous forces so close to large residential areas: 'I'm big, and brash, and you have to admit my POWER'. Even if I took the 'beauty' out of what I think of as the Annual Report approach by emphasising film grain and technical crudity, the emotional link would be there. So I made them small. I was interested in another kind of power.

I did, however, make photos that were hardly technically perfect. It was difficult getting them just right - 'wrong'. While I rejected some in the editing process as being too 'beautiful' or 'good' as photos, I rejected others as being too crude. It is always the kind of energy portrayed in an image that makes me decide whether to select it or not.

As one looks around the wall (or turns the pages of the book), I hope for a progressive build-up of two levels in tandem. While one level can be seen to relate to the 'look how dreadful it is' syndrome, I would prefer the documentary aspects to provide information rather than to inspire guilt. I hope the other level builds up some sort of spirited intimacy and energy; an energy that we could choose to use differently.