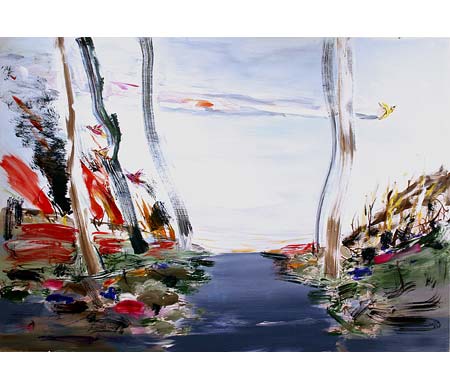 Micky Allan (painter) and David Pereira (cellist) improvised their collaboration, Black Mountain Quartet over a few intense hours in the gallery, structuring their compositions around four different times of the day with key words ('tender' and 'stormy') to set the mood. Pereira produced a four-movement solo cello piece, and Allan a sequence of four dynamic and moody landscapes with swift brushstrokes of pure colour that occasionally spilt across the walls of the gallery. Pereira performed his composition in the gallery on April 13.
Russell Smith
Artists & Musicians: Collaborations, Muse, May 2003

NOTES ON THE COLLABORATION WITH DAVID PEREIRA

The first collaboration with David was in 2002 for the exhibition Collaborations - Artists and Musicians curated by Merryn Gates. for which we made the piece Black Mountain Suite. Four large panels were primed and installed in the gallery space and David and I met there a few days before the opening of the exhibition to create a new piece specific to the show. We had briefly discussed a few ideas and had settled on Black Mountain (one of Canberra's landmark mountains) as a theme, but basically we didn't know each other. We agreed on four sections which we loosely thought of as moving through the times of day and later named Early, Sun, Storm, and Late.

The experience of those few hours when David composed and I painted, or vice versa, was exhilarating. Sometimes he would lead with a sound and I would respond with strokes of paint, then I might splash in a colour, which would then suggest to him a new sound; it was like a dance. At times the dab, dash or sweep of the way I put on the paint seemed totally synchronised with the cello sounds as I was hearing them and it was hard to tell which came first. At times he would pause to write down what he had found he played, at other times I would pause to mix new colours, but the mutual rhythm of the whole was unbroken. I felt fully myself, but as if I had stepped into territory I had not previously charted, a third space that infused the work with qualities other than those I was at that point quite familiar with - the whole, as always, being greater than the sum of the parts. That at least was how it felt to me. The results might lack a certain finesse of the kind that comes from more time spent in the making, but the feeling of abandonment into some sort of outpouring of inner order made the time spent (one and a half hours) very special.

In 2003 we worked together again in much the same manner to create Brindabella Night. We prepared a little more and took a little longer, but the process remained dynamic, fluid and a joy.

I find my work with David has stimulated my larger body of work and activated much within it in ways I find difficult to explain.

At one stage David had my painting Violet Night, a work from the exhibition Quietly, Infinity in the Everyday, hanging in his music room while he composed a piece evoked by its presence there over time.

2005 saw me develop a series of large pastel works based on a quintet for four violins and a viola that David had made in response to the death of a friend and certain music by Schubert. He had called it Bitter Night: five reactions and one epiphany and the works I made in relation to the various reactions charted in the music (denial, anger, pain, despair, hope, epiphany) were on display at its musical premiere.

More recently, at the 2007 Kangaroo Valley Festival, I painted live to the playing of Ghost Lake, a new musical composition of David's based on Weereewa (Lake George), a place which was the basis of a body of work I was in the process of creating. Discussions about the lake and visits there together helped form my evolving response to what has been a complex stimulous for many artists.

At the opening of my exhibition at the Tin Sheds Gallery in Sydney in July 2008, David has offered to improvise his response to the artworks around him. This steps our collaboration into yet new territory.

My work with David has been touched by something very special, and whatever form it might take in the future, I look forward to its unfolding.

Quietly, Infinity in the Everyday