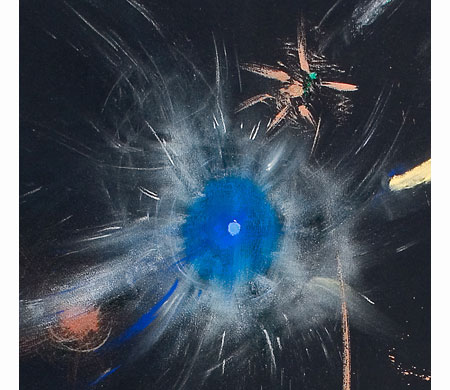 These works are my response to David Pereira's musical composition 'Bitter Night: Five Reactions and one Epiphany', which he composed on the death of a friend.The drawings, one for each 'stage', were then shown at the premier performance of the work.
Micky Allan, 2008

'Bitter Night' is a piece for solo viola, two violins and two cellos. It begins with a musical reference to the Trio of Schubert's Op. 163 quintet for the same combination. This is on account of that music's potency in the ears of the string chamber musicians who also might play 'Bitter Night'. And I chose it because for me it has in its ambiguous eloquence something about death and grieving. I confess that in the background was my hope that I would write a piece good enough that it could be played on the same programme with a commendable performance of Schubert. After the initial announcement of part of Schubert's melody I proceed to work through possible 'stages' of grieving: Denial, Anger, Pain, Despair, Hope, Epiphany. The title is a distortion from Dylan Thomas' memorable admonition: "Do not go gently into that good night."

David Pereira is Senior Lecturer in Cello and Head of Strings at the Canberra School of Music. From 1980-90 he was cellist of the Australia Ensemble/ from 1980-87 principal cellist of the Australian Chamber Orchestra and from 1987-89 he was Principal Cellist of the Sydney Symphony Orchestra. David has premiered numerous new works and has made multiple recordings for the Tall Poppies label/ winning the Sounds Australian National Award in 1998. In 1997 while on tour with the AYO in China David began writing on the art of cello playing. So far he has published one large and one small book and a first volume of studies. Composing/ initially for solo cello/ was to follow/ and he partly identifies himself these days as a fast-learning late-starter composer.