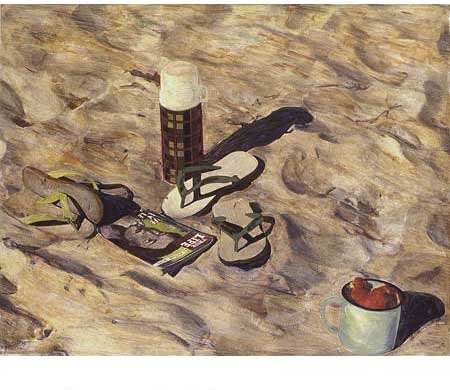 I like hand-colouring because of its painterly quality, and its ability to render spiritedness and fluidity.

Travelogue records a trip taken through the north of New South Wales and up the Queensland coast as far as Yeppoon. It includes one image from Victoria, where I used to live, and several from Mountain Lagoon, New South Wales, where I live now. The negatives were taken over several years.

One thing I particularly like about photographs is their detail. It is a tonal detail painting cannot get, no matter how meticulous. I also like the element in a photograph that states "this actually happened" or "this place exists".

Colour photography, except for the use of instamatics, has to my mind developed a tradition of peculiarly static images. Although this tradition is changing, I associate colour photography with something flat and hard.

I like hand-colouring because of its painterly quality, and its ability to render spiritedness and fluidity.

It seems to me that in the instant I am photographing I move outwards, and whoever or whatever I am photographing moves forward towards me. Through that motion a new physical and psychic construct is made which is neither me nor the reality photographed and should not be taken as such. That would be like calling a river the sea, or a remark about the sea, the sea itself.

I do not feel my camera is an instrument through which I "shoot".

Travelogue consists of painted photographs recording a trip taken through the coastal areas of New South Wales and Queensland. It involves travels in three areas. One concerns the intimate journey of camp fires and domestic still-lives. Another is more social; travel that notices, for exam pie, mounds of coal that look like ordinary hills (No 14); that Queensland is a repressive state (No 1); that Iwasaki, a Japanese businessman, bought huge tracts of its prime coastline, generating strong local objection (No 9, with its smashed sign and camouflage colours in the landscape.)

The third area of travel is through notions of art. The sign saying "Art" (No 22) in the Hawkesbury River Local Animal and Produce Show introduces this. Photographically n indicates the local art that might be behind the door with the palette sign. Here it is Art with a capital 'A'; on a gallery wall, but not without tongue in cheek. Style and intent encompass the adolescent overboard of 'Hay?' (No 17) which was done with a friend, giggling, as a 'last one' that other artists might have Ie ft out; and range to the intentionally 'traditional' and conservative paint quality and colour of 'Queensland' (No 1). The stance of the woman bending over the fire in 'Making Camp' (No 24) suggests a similar figure in a painting well-known in Australia, called 'The Artist's Camp' (1886) by Tom Roberts. This painting shows a gathering of artists at Heidelberg which is often seen as the beginning of the first consciously 'Australian' school of art. I noticed this connection after making the picture and liked it, especially the fact that here the figure is a woman.

Also relating to notions of art in these works is the range from those that are clearly photographs, with only light painting (usually in watercolour or gouache) over revealed photographic tone, to those in heavy oils where the photographic base (whether a photo of great detail and depth of field, or a photo of 'broad strokes') is a surprise. The crossover from photograph to painting is intentionally blurred. I use photographs because I like the element in them which states 'this actually happened' or 'this place exists'. I paint them rather than use colour photography because I like the spiritedness and fluidity of paint, and the independence of the colour.

Most of the photographs/paintings in Travelogue involve the presence of animals or people, or at least the effect of decisions made by people in relation to 'nature'. A few are what is known as 'pure' landscape. These are not easy areas to deal with at present. There is a certain pressure of thought in Australia at the moment which believes landscape work of any kind is simply no longer relevant. This seems to be partly a reaction against the stranglehold the Heidelberg School exercised over our imaginations, and partly due to notions that to portray land is to portray ownership of it, or at least represents a safe escape.

Since this work is related to the photographic tradition as well as the painting tradition, it is inevitably connected to the permeation (here as much as elsewhere) of the Ansel Adams notion of the perfect print and the power of the wilderness. This, to me, is a peculiarly static combination of mystique and control. In one way such photographs attempt to harness the power of nature, but in another way they belittle human effectiveness in relation to this 'greatness'. Technically there has been some reaction to this, but emotionally there has been less, and it is still true that technique in photography is often used as a means of objectifying nature by giving it all the qualities we lack, in a way not dissimilar to the conventionally male method of objectifying women by giving them all the 'beautiful' and 'mysterious' qualities they are not seriously prepared to incorporate in themselves. Sometimes I want to shout 'Rock's Lib! Now!'

For an Australian there is also the 'presence' (in both senses of the word) of the native Aborigines and their traditionally powerful and integrated relationship to this place. Through them we know that attitudes other than our own are possible. They believe that animals and land are alive with 'dream power', a force of cosmic dimension and enormous wealth, which they are in dynamic, intimate, and in fact, inevitable relation to. Despite the Heidelberg School and the outback myth, we Australians are afraid of the bush, and afraid of the quality of the Aboriginal connection with it.

Travelogue exists in this context. It displays our tentativeness (we hug coastlines), our romanticism (we sentimentalise the 'trip away', we 'love' animals), our abuse and our misguided attempts to conquer and control 'nature'.

In no way are these images intended to inspire guilt (a useless emotion.) They are not, in fact, intended to 'inspire' anything.

There is an energy inherent in them, however, that I have attempted to keep fluid. It is as if any minute the wind might change and shift everything. For me there is a sense that our attitudes could change just as swiftly, if we wished. Perhaps the energy I mention involves delight. It is not, however, an energy outside us, or too grand for us - nature is awesome, but it is also intimate and ordinary. Its (our) grandness can be a domestic power as thoroughly usable as gentleness, and both can be an inevitable and unpretentious part of everyday living.