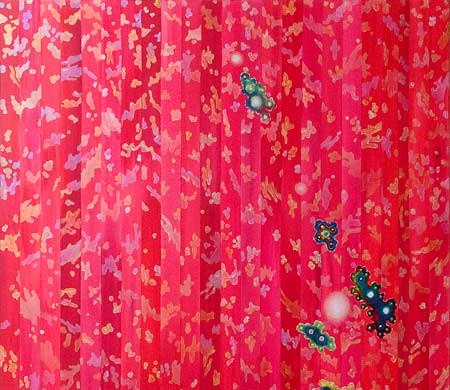 Based on cycles of nature, ageing and mood, Sunlight and Shadow reflects inner weathers - what it feels like to be in certain places at certain times, close up in organic patterns of growth, or far away in something unnameable.
Micky Allan, 2008

A work by Micky Allan is a reflective experience.

The approach is gentle, alluring. We slip past the glazed surface to the subtle dappling of the inner work. A bold mark establishes the spatial reference, the sweep of colour has such heroic authority as to recall the works of an earlier generation- but wait- could that generation have used glitter paints to make their mark? What happens when the very Zen black of the abstract mark is made to sparkle? This almost inconceivable disruption of the expressionist gesture carries its own inner tremors. Nevertheless the gesture has established the dimension of the work. We have been brought to that mythic space of philosophy, tethered to the here and now only by the trace of the artist's physical passage across the surface.

The physical trace of the artist's hand is important. Figurative references such as city skylines, seahorses and an improbable parrot occupy this same plane. A rich vibrating tension is set up between these different modes of representation and the spaces they establish around them. Then, following the reflected light back to the glazed surface of the work, we become aware of a huge fractal spiral etched into the glass. Nearly impossible to reproduce, the spiral floats at a subliminal level. This fractal establishes the theoretical space of science, suggesting the realm of mathematical and higher mental faculties- a reality which is rarely conceived of as consistent with the imaginative or emotional faculties. We navigate these disparate structures every day but rarely see them represented side by side.

This intersection of co-existent realities and their corresponding visual grammars make their own pictorial demands. This is not a flat, all-over patterning of figurative elements, where each figurative icon is reduced to equal abstraction. In these works both the figurative and abstract elements have multi-layered significance within the same knotty field. They are part of a larger pictorial grammar which responds to the working through of an active and engaged interior life. Allan offers us a syntactical space in which experiential reality in all its complexity is represented in a new and exciting way. The conjugation of formal languages and their respective spaces is masterly.

Echo 2008 takes this experiential reality, amplifies it, and extends it. Here the rich tensions are not confined to the two dimensional surface but slip off the wall- flow across the floor- and become increasingly solid. The pale canvas refracts into bleached bones which further break down into the lush humus of the everyday. Interactions are set up between the litter on the floor and the canvas, motes of dust and particles of particular sensibility interpenetrate. Reality is shown to be permeable and multiple. Allan's work offers us the opportunity to reflect on the complexity of lived reality.