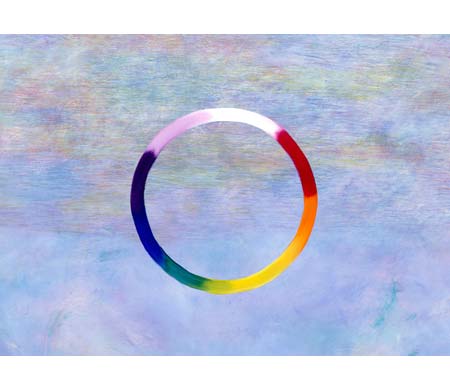 These works are as a banquet for the viewer...
John Matthews
Micky Allan - 'Places in Space', Agenda, No. 3, Melbourne 1988


Micky Allan's City exhibition is rather aptly called 'Places in Space'. Her larger paintings are indeed spacious works, so much so that viewers who like terra firma are likely to experience something akin to vertigo on looking at them. The eye, strange balloon that it is, is forced to travel much further than it may wish to go.
Allan's mind is not an analytical or empirical one. Instead, it drags together odd pieces of information, and does so in such a way that they appear to be connected. Where others think, Allan muses.
You will see what I mean when you look at such works as 'Island' and 'The Beheading'. The first, the surface of which has been worked with both oil pastel and acrylic and consequently looks like an immense field of mother-of-pearl, appears to contain just three elements: a ring of light, a tiny atoll on which five figures are dancing beneath five coconut trees, and a pair of celestial cities deep in the top right corner.
The puzzling relationship between these three elements induces you to move closer, and as you do so you notice that there is a diaphanous yacht on either side of the tiny island. Neither yacht can be seen from any considerable distance.
Allan enjoys playing cat-and-mouse games with the viewer. Formulae and charts are imprinted on some of the stars and galaxies which are sprinkled across the vast expanse of 'Pink Space'; the landscape in 'The Beheading' looks like a processional float drawn by a pair of unicorns.
It is details like the latter which lead me to conclude that the space Allan is primarily concerned with is, of course, the imagination.