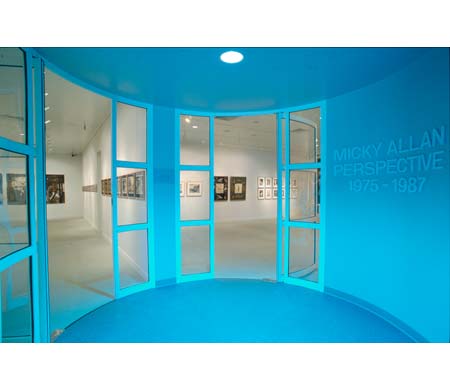 'Thus the creative fabric ... is all inclusive: of vastness and minuteness of scale; of contradictory systems and hierarchies; of macroscosmic and microscopic energies; of historical and personal references; of stasis and movement.'
Jenepher Duncan, 1987
Micky Allan - Back to the Future, Art from Australia - Eight Contemporary Views, 1990

Travelogue, My Trip, Gladioli, CSR, Yooralla at 20 past 3, Botany Bay Today, Family Room, Elizabeth, Near and Far, Now and Then, Travels without my Aunt, Songs from the South of France, A Probable Place, Central Australia, Recent Works

Micky Allan has spoken of imagination as 'the combining force' in her paintings. True of her recent paintings and drawings, it might also be one of the continuities in a career that runs right back through the 70s, a career which has comprised lengthy and significant contributions to Australian photography along the way, as well as fabulous drawing and painting.
But if this remark about imagination throws light on the paintings, the works in question serve, too, to give to those words particular meaning and accent: they come closer to naming something central to the value, excitement, and energy the paintings possess and so breathtakingly impart. The imagination in the paintings is one of inclusion: of immensity and smallness of scale; of contradictory systems and hierarchies, modes and 'worlds' entertained, and given temporary equivalence.
It is a capacity for inclusiveness and openness - not the imagination of system and overarching order, the bringing of tablets from the mount.
And 'force', as Allan uses it, refers not to constructive power, but to the imagination as an energy the artist can attune to, can tap. The paintings are anything but muscle-bound - a light and omnipresent singing energy, mercurial and phantasmic, rather than the titanic energy often associated with 'major' work. Yet major the recent works undeniably are - in look and effect and address.
The coming retrospective showing of Allan's work at the Monash University Gallery will be timely and, one would guess, very large. Micky Allan's output over the years has been high and in a great many media and passes through many phases and styles: photography - handcoloured, painted, and in 'documentary' style - portraiture, landscape and inner city; pastels, charcoal drawings; painting and collage.
Public perception of this artist has commonly trailed well behind the art world's perception of her and behind the current state of play in her work. Through this retrospective the larger public will be brought up to date. Virginia Coventry's recent book on our current photography, The Critical Distance, features, for example, that work with which Allan's name is still associated - handcoloured photography in series. Yet it is many years since Allan made these influential pieces. And, ironically, while she was producing this work it was often strongly resisted in the photographic world as somehow 'not photography'. Of course the artist was never particularly concerned that the work should be categorised correctly.

Ken Bolton
from: High Song/Serious Play, This Australia, including Australia Arts, No. 10, 1987 and Otis Rush No. 1, Experimental Art Foundation, Adelaide, 1987