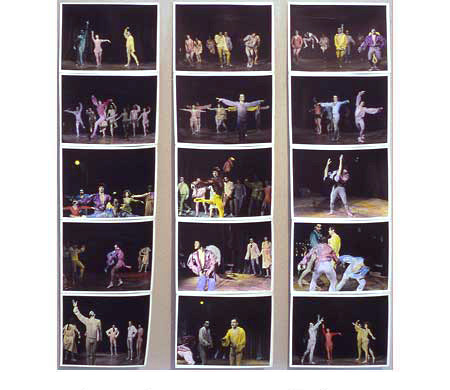 In the mid 1970s I worked as a set and poster designer in the early days of the Pram Factory Theatre in Melbourne. These photos record my friends' 'performances' both on and off stage, in formal productions and in everyday life.
Micky Allan, 2009


[Micky Allan] documented performances and provided visual material for the first feminist play staged by the Pram, Betty Can Jump in 1972. At the time, The Pram was the nucleus of all that was experimental, radical and advanced in Melbourne ... One of my earliest recollections of our friendship is that of visiting the house she shared in Fitzroy with Laurel Frank (the subject of one of her earliest photographic series, and one of the creators of the 'Popeye' puppets) and Virginia Coventry who first showed Micky Allan the processes and techniques of the darkroom. There were posters and paintings everywhere, costumes for Laurel Frank's puppets in process in the garage, the smell of coffee, Drum and photographic developer.
Micky Allan's photographs from these years were both the product of mid-seventies collectivism and a contribution to it. One thinks of other women who emerged out of this matrix of Carlton, Tamani, the Albion and early feminist consciousness: the photographers Sue Ford, Ponch Hawkes and Virginia Coventry, the actresses Evelyn Krape and Jane Clifton, Robin Laurie who went on to become an acrobat with Circus Oz, writer Helen Garner and director Kerry Dwyer.
Memory Holloway, 1987
In the Tracks of Isis, Micky Allan Perspective 1975-1987, Exhibition Catalogue