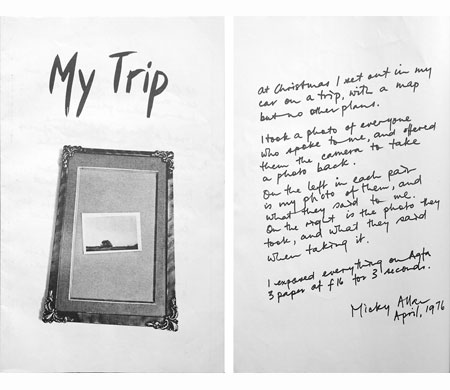 My trip began by recording a mundane personal journey over time and became an exploration of people's attitude to photography and a woman travelling alone. I published it in newspaper form and sold it in newsagents.
Micky Allan, 2009

ONE day in 1976, when I was working in The Source Bookshop, a woman wearing white overalls suddenly appeared before me with copies of her artist's publication My Trip.
In those heady days of the women's movement, the overalls could signify only one thing, but there was nothing in Micky Allen's manner that conformed to the popular stereotype of "humourless feminist", despite the uniform.
Following her equally swift departure. My Trip was dutifully laid to rest alongside piles of Rolling Stone, The Digger and assorted publications by would-be poets. There it remained untouched by dopeheads looking for the latest Furry Freak Brothers comic and "grass roots" members of the peace, love and cucumber brigade. Its appeal, of course, being strictly for artists and others acquainted with non-painterly developments in Australian art since the late '60s.
Micky Allen's name was vaguely familiar. Not as an artist, though, but as a photographer whose visual documents of the skinhead sub-culture were featured in The Digger, a local rag of some notoriety in the early '70s. If my memory is correct, Allen's photographs, like the memorable skinhead pictures of another Melbourne photographer, Carol Jerrems, are a reversal of the customary images of yobbo aggression.
My Trip, which is now on display as part of the survey, Micky Allen: Perspective 1975-1987, at the Monash University Gallery, is very much a product of the early '70s. Although one of the best, it is nevertheless a late arrival among the photographic works of artists who turned to photography and to other alternatives to painting. While not actually dead, as claimed by some conceptual art purists, painting was seen at that time to be badly in need of a transfusion and its traditional superiority ripe for a challenge.
Allen, like other artists of her generation, used photography as a means of recording precise moments in time, or to structure aspects of her everyday experience. My Trip is a photographic journey in which the time of encounters with strangers and resulting verbal exchanges are precisely recorded.

Travel on many levels, including the most straightforward and ordinary, has been a consistent theme in my work, and My Trip is no exception. Taking a final form that loosely resembles a 'newspaper', which I placed in strategic newsagents as well as exhibited in galleries, it grew out of a car trip taken when I was in need of a holiday after a busy deadline. The idea to photograph everyone who spoke to me and to give them the camera to take a photograph of whatever they liked in return dropped into my mind from 'nowhere', but dovetailed right into my predisposition to consider 'life' and 'art' as one. I planned to sleep in the back of the car and set off with a map but no itinerary or set time away, trusting intuition to guide me well. Keen to get going and out of town, I realized I had no matches for the first night's campfire (in the late 70's one could more easily 'make camp' along the waysides) and as I stopped to get some matches from the first shop I saw, I realized I would have to 'start', as the shopkeeper was bound to say something. I was exhausted, so nearly dropped the whole idea (twigging results would have been out of the question), but I did begin, and was surprised how much I enjoyed the exchange.

The trip itself is very plain, but the variety of responses both in myself and in those I photographed bought out various levels of attitude to both photography and to a woman travelling alone, all indicative of the time. The variation was intriguing - some people were fascinated, some bored, some resistant, some avidly interested in the opportunity. One person thought they might 'break the camera' if they used it. Some wanted technical information, most did not - I let them decide. Once I visited 'art' friends and noticed the change of language and attitude around the use and fact of photography. Elsewhere several boys gathered around me and started to taunt and be oppressive but when I realized I had to explain what I was doing or give the whole concept away, and handed them the camera, the whole situation diffused. They became instantly interested and engaged and keen to have a go. The digital and mobile phone phenomenon has completely changed the domestic use of photography but it was not then a 'natural' part of people's lives.

While covering range within the focus of specific time and place (another consistent theme in my work given early exploration in this piece), My Trip also reveals my interest in the broad sweep of universals as they play out in the particular: I counted myself unbelievably lucky to have two small boys discuss how to take a photograph just as I was nearing home on the last day, the older brother saying to the younger: 'There's the button. And put your eye there. And when it looks right, press.' This summed up so much. If I am ruthlessly honest, I later sped past a shop I might otherwise have gone into for lunch, so as to make that image the last.