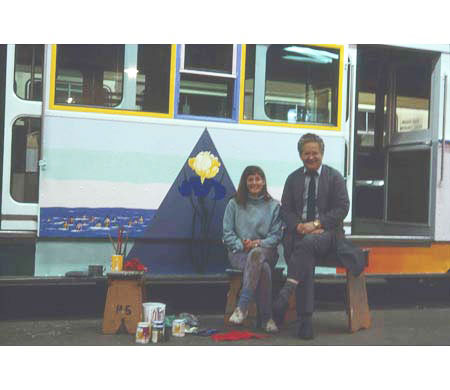 When faced with the task of beginning the tram, the first thing I did was to get on the roof and paint that à la Pollock, splattering and dripping paint everywhere, giving myself a paradoxical sense of control.
Micky Allan, 2008

I had the plans to follow, the detailed drawings for the submission to Transporting Art, but the tram itself was a different matter, rather wild in its initial hugeness. In order to weather the weather they would be in, trams needed enamel paints. Compared with the paints I usually used, enamels are much harder both to manoever into loose free strokes or nuance into anything subtle.

Nevertheless I of course began, plugging away at my imagery: a huge white whale with a skeleton inside, a giant red & white striped tulip, a view of light seen through a prism, the colour spectrum of a star as seen through a giant spectroscope, a gold triangle with a white rose, a blue triangle with a yellow iris, tiny footballers and small swimmers to identify with the people of Melbourne. As usual I worked with the interactivity of abstraction and representation, and with vast shifts of scale, bringing disparate imagery into what seemed to me a natural and palpable order, working very much with the architectural sectioning of the tram. That a giant tulip (macro lens) should butt up against tiny swimmers (distance or tele lens) not far from a whale (wide angle) seemed to me neither here nor there, because to me it simply 'looked good' (how else in the end does one decide?)

I painted the ceiling with small blue and silver galaxies to further confuse the sense of scale. In the evening I warmed tea or cooked dinner on the wood heater, which nearly took the edge off the cold. The rambling tram sheds where the work was done were vast and noisy, trams coming and going or resting a while to be painted as 'advertising' trams further down the sheds, discretely some distance from where the 'art' trams were done.

I had been warned before I began that all the women who had painted trams before me had ended up weeping in the toilets. It had been the only place to go to escape the frustration of having to deal with the old style foreman who used to walk by all the time or sit in his office nearby and stare. It had reminded me of once when I had worked painting studio sets and backdrops for television and the men had tended to spend a lot of time looking to 'see how the sheila held the brush'. One day I too found myself in the toilet, weeping. My contract had said I could do a section of my tram through spray painting but the foreman said no. I had to stand my ground, which I did, despite weeping sessions in the toilet. It went on for days. I wouldn't dream of wanting to spray paint now, but then, it was in my contract, so...

Finally some sort of compromise was reached, which was not really a compromise since I did spray paint but in their spray paint booth, which I had not been told about, and suddenly we were the best of pals, getting on like a house on fire. Apparently I had passed some test by standing my ground, and the air wasn't thick any more. The foreman and I could laugh a lot and he even showed me how to hold the brush when using enamel paint so it didn't drip down the handle (irony not lost - nor the realisation that I was almost finished when he told me) and also how to cut paper etc on soft plate glass so as not to ruin the cutter blades, kindly taking me to a distant workshop to find the right glass.

So I remember the challenge of painting a tram with great affection. I was very sad when my tram, No. 724, was removed because there was asbestos in the ceiling. Now all the 'art' trams are gone, and I think Melbourne is the poorer for it.

I used to love the fact that people could get right into something I had created and that there it was, trundling around in space. Once I caught it and excitedly told the conductor 'I painted this tram'. He said he had always liked this one and that I could have a free ride.