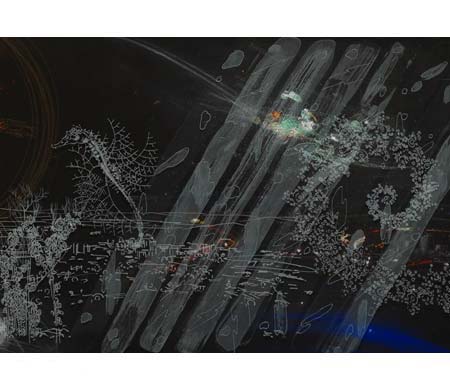 In Inner Weather, sparse but suggestive references to land, cityscape, memory and place weave their way through abstracted patterns of night and day, seasonal focus and shift and the ebb and flow of internal mood.
Micky Allan, 2008

Micky Allan has always been interested in unusual interplays - of media, of subject, of visual grammar. Her major series: Babies (1976), Old Age (1978), and Prime of Life (1979), explored the tensions between the media of paint and photograph, representations of emotion and document; apparently disparate codes of practice in which dislocations of scale, public and private spaces played a part. The apparently regular order of the photographic vocabulary was displaced by an irregular order more akin to the way we experience the world. In the mideighties, Allan's practice turned from the photographic and returned to painting and drawing. Travels without my aunt (1985) was a major turning point. Jenepher Duncan described the works:

... nothing is fixed ... the normal boundaries of style, composition and image constantly shift, impressions are fragmentary, the movement between the real and the felt, the concrete and the mystic, endlessly fluctuating.1

This collapse of normal boundaries remains a feature of Allan's work into the present. Her recent exhibitions - Sunlight and Shadow at Helen Maxwell Gallery, Canberra (April 2008), and Inner Weather at the Tin Sheds, Sydney (July/August 2008) - continued to explore the flux between the real and the felt, the material and the immaterial.
The interplay between the material and the immaterial is of particular contemporary interest, bound up as it is with the visual vocabularies of abstraction and representation. In Allan's work the relationship of these modes is interrogated with real if deceptive rigour. Allan's conceptualisation of her practice is indivisible from the media in which she works. For Allan:

The materiality of the paint, pencil, pastel or engraved line is central and definitive, whether used thickly or thinly, intricately or in bold sweeps. Content arises out of this materiality, and helps take it beyond both idea and story.2

Allan's choice of medium and formal vocabulary to address the interplay of material and immaterial is considered and meaningful. The space of Moth Cycle (2008) is defined by the black abstract marks which punctuate the picture plane. Gestural and expressive, they define themselves against recessive pale washes of colour. A line is drawn between a top panel and a darker, more intense panel below, a white splash enters the top panel but the line is impervious to the passage of black. They exist on different planes but underlie and overlay. The space is abstract, philosophical and conceptual. The black gestures have an authority which references the heroic, the calligraphy of another generation. Yet they are shadowed by gold glitter paint as if in a yin-yang dialogue. Allan's commitment to the real world is too strong for ascetic withdrawal, and the experience of being in the world exacts a toll on the heroic mark- making. Glitter and opalescent paints invade the Zen space. Yet whether severely monochrome or laden with glitter paint, the mark is both self-aware and definitive. The imperiously self-sufficient gesture serves as both visual reference for an abstracted landscape and abstract mark on the paper. A sudden vertical exclamation establishes a knowing ambiguity between the materiality of the medium and the image support. The moths exist in a space defined by these expressive gestures. Minutely observed, both alive and dead, they are representation and abstract markings both. Not only does the mark structure the formal order of the painting itself, it also articulates the boundary between representation and reality.
Concrete materiality is a natural reference point for the viewer, but in Allan's work the question of what constitutes the concrete is not simple. Solar Dust II (2008), from the exhibition Sunlight and Shadow features a delicately conceived pair of seahorses tethered to a stem of underwater weed. A mathematical spiral overshadows the pair and a stellar constellation lights the otherwise dark surface. A shadowy fractal sinks to what we interpret as the sea floor. Then the constellation reveals itself to be part of a lasso of yellow paint part-binding the spiral to a sweep of gestural opalescence. All are indubitably ingredients in the same concrete world but each occupies spaces inconsistent with each other's reality. They can only meet in the ebb and flow of experience. Here they inhabit an abstract space where bold brushwork is the only holdfast for the delicate weed. The gesture, so conceptually studied in Moth Cycle, is here quite simply the mark of the here and now. We experience that sense of touching something greater than ourselves - a universe at once mathematical and deep-sea-strange, astronomical in scale and lassoed into immediacy by the yellow paint. If the materiality of the mark is central to the content, it is also true that for Allan content arises out of the unseen. It is not possible to understand Micky Allan's work without grasping her philosophical commitment to the immaterial. In the tradition of many great artists, historical and contemporary, Allan has a deep-rooted belief system which informs her outlook on life and her approach to the world. The interplay between the vocabularies and grammars of art practice springs from this deeply held philosophical position, which traces its intellectual lineage through the Neo-Platonists and the Gnostics to a contemporary interrogation of the real. Allan writes:

I used to think in terms of dualities and 'the point where opposites collapse', but now feel that what I am really attempting to do is synthesise vast multiplicities, but in a way that in the end feels simple, material and real.3

In Allan's work this tension between materiality and immateriality is enormously profitable. Her ability to express the experiential reality of being part of the ebb and flow of multiple realities is intellectually nourishing. How can we negotiate a reality defined by science, experienced in terms of the personal, apprehended as part of a larger unknown?
In Allan's work these co-existent multiple realities have their parallels in a raft of vocabulary and grammars. Winter (2008) sees abstract gestural marks occupy the same visual field as a diminutive wombat on an outsized piece of weathered bone; another bone floats alongside. These reference points hover over a flat visual field which, while compositionally suggestive of solid land, is every bit as abstract as the panel above. In fact bone, abstract markings and wombat sit on drafting film laid over the painted ground. Like the relationship between the bone and the wombat, the relationship of upper and lower panels is carefully considered and choreographed. Representation acts as a metaphor rather than illusion. The wombat and the bone stand in for a way of viewing and representing the world. The visible world appears sufficient in itself but on reflection it is clearly only one part of a varied and multi-faceted system.
Allan's interplay of formal languages and their respective spaces is masterly. In Galah (2008), paper and drafting film are again both support and bearers of meaning in themselves. Opalescent rice paper and glass pebbles 'below the line' add to the complex play, and counterbalance the severely formal geometric designs interlaced with drifts of paint and a cheeky galah. Together they create a space which is both universal and acutely particular, humorous and coldly intellectual, both dream-like and conceptually rigorous. Allan's remarkable achievement is to make this ambitious interrogation of the real appear soft as a feather. In truth, the works are as sharp as a tack.
The encounter between the particular and the universal is a re-phrasing of the dialogue between the material and immaterial, positioned this time not as 'the point where opposites collapse' but as a complex web of interrelationships where the universal has particular engagements with the vast multiplicities of the real. That this has exciting ramifications for the practice of imagemaking should come as no surprise. Reconceptualising the relationship of the image to the visible and, more importantly, to reality in the context of a richly conceived philosophical position, is rare in any age.

Dr Jenny McFarlane is a freelance curator and writer. She advises on public collections in the ACT including the collection of the Legislative Assembly for the ACT.