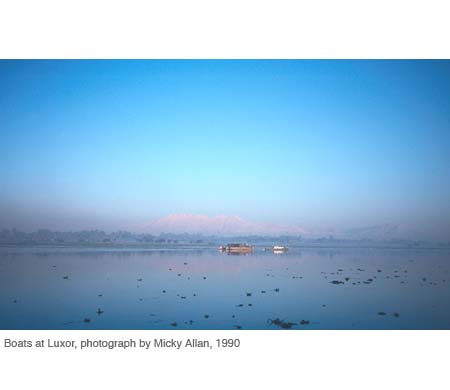 These are sensuous, painterly works, full of lambent colour and the haze that results from a suffusion of light
Lynette Fern
Sydney Morning Herald, February 1992

Light of the Ancient

ON SHOW at Watters Gallery until February 22 are 11 oil paintings by Micky Allan. These are sensuous, painterly works, full of lambent colour and the haze that results from a suffusion of light.

Oil paint represents a new direction for Allan, who in the past has been better known for her photographic work.

The centre of the exhibition is distance - not only geographic distance but also those distances of the mind to do with cultural difference and time.

Allan has located these works in Egypt and Greece, both of which she has recently visited; and while she has addressed the physical presence of those places, she also explores our pre-existing ideas about them and the potency of stored information.

Underlying the surface sensuousness of the work are a remarkable economy and gestural control. There is a spareness to the suggestion of shapes - the flower in Egyptian Lily, the sails of the feluccas in On the Nile as Allan plays with colour, drenching her canvas with blue or leaching it away to white.

There are references to the photographic medium. Allan's oils have a metallic sheen - silver whites, copper golds, gilt - these simultaneously suggest the blinding of light of the sun and the mysterious alchemy worked by emulsion on film in the darkroom.

The linear representations of figures from the Greek and Egyptian pantheon are so precisely rendered as to appear like stencils. Their white ghostliness imposed on the landscape background recalls the super-imposition of a photographic negative on an existing image. We see what the artist wishes us to see.

Allan deals here with the duality of perception. She paints the commanding presence of the Nile at Luxor - blue below reflecting an infinity of blue above. The hard arid cliffs that mark the edge of the implacable Sahara swim, mirage-like, in this blue.

Imposed on this potent geographical presence are precisely delineated figures of Egyptian gods - ghostly images of the rich religious creations of a long dead people.

She addresses here both the past and the postmodern, using metaphors from earlier cultures to signify enduring human concerns.

One of the gods portrayed is Anubis - that Egyptian Charon - ferrier of souls across the Stygian divide. Thus does she refer to one perennial human concern - mortality.

The work also encompasses the extraordinary range of human feelings, the capacity of the intellect for wonder, the unpredictability of environmental forces, the mind-sets that colour new experiences.

In her work there is great freedom. On the Nile shows three feluccas as they drift through the blue demonstrating the timeless pleasure of playing at the point of balance. In Delphi II the mountain is rendered with graphic realism but radically reinterpreted by the Danae-like shower of gold interposed between mountain and viewer.

Micky Allan understands that the places we travel to are altered by what we already know of them. Her paintings encompass a myriad of worlds.