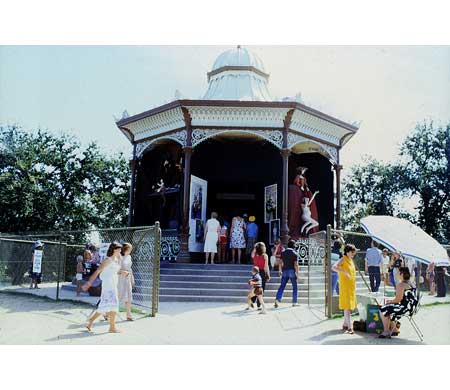 The Pavilion of Death, Dreams and Desire:
The Family Room, 1982

Some people are terrified and some are fascinated, and children love to have it happen to them. I think a photograph does capture a little bit of the soul, but it's like a conversation - you give off a bit of yourself and you make more room for something else to come in. You can let your photo go, you know, it's not going to kill you.
Micky Allan
Pavilion of Death, Dreams and Desire (exhibition catalogue), 1982

THE FAMILY ROOM forms the interior of the Rotunda in Elder Park. Fourteen full-length portraits, each a photograph painted in oils, form the walls. The people represented are young, middle-aged and old. Above each is something chosen to represent them. They are portraits that trace the changes age brings; changes in expectation, attitude, appearance and desire. Being members of one family (mine), interconnection and likeness across the generations are also there.

Much recent photography has focused on the bizarre, or at least on people in the extremes of circumstances. To me the ordinary is fantastic, complicated and very beautiful. The people in The Family Room are not extreme. They are neither very rich nor very poor, and their desires are not unusual.

It is now recognised that artifice in photography is as extensive and natural as in any other art medium, despite the convention of it carrying the weight of 'fact.' I take this as understood. Still, there is in photography an element which says "this person, this place, exist," which I delight in. I use paint rather than colour photography because I like the spiritedness and fluidity of paint, and the independence of the colours. Sometimes the painting supports the photograph, sometimes the photograph supports the painting. This use of photography is in a way close to its original purpose and intent which was to draw with light (photo-graphy) rather than with pencil as a basis for a painting.

Spatially, the octagonal shape of the interior of the rotunda, beautiful as it is, presented a problem. It strongly suggested the construction of a mini-universe surrounding the central point. This would affirm the outdated ethic of Newtonian physics, which believes the world to be totally understandable from a single point, and if we could just strip ourselves of everything subjective, we could tabulate it exactly, since its existence is independent of us. Despite the fact that I have little or no faith in Science, it pleases me that particle physics now "proves" this "objectivity" untrue. It stresses there is no reality independent of our relationship to it, so that its nature can and will shift. I have tried to reflect this by placing the panels in a zig-zag around the octagonal space, so there is no single vantage point from which the whole can be seen. The viewer has to move around the space to see each person fully. At each move, the sense of the whole shifts, and emphasis is put on the fact that not just metaphorically, but actually, an observer creates the reality they see.

Each person took care to present themselves as they wished. As portraits they hover between the formal and the informal. Like most of us, they also hover between anxiety and delight. On the one hand they reveal traces of the tiredness, role-playing, and frustration that anyone living in this society is likely to experience, but which we rarely choose as our public face. More than counter to this however, is their warmth, buoyancy and verve, and to me the sense that just as their expression and form might shift at any minute like a wind change, so might our sense of the possible.