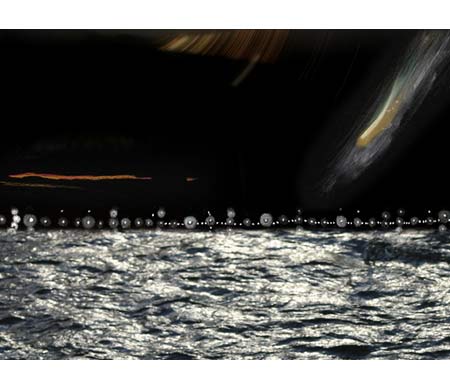 Combining Micky's artwork and my photography we collaborated to create a series of four photographs, Fall of Night. It was the result of us being asked by Helen Maxwell to participate in the exhibition Fall of Night at her gallery which was part of Vivid, Australia's first national photography festival.
Steenus von Steensen, 2008

In Fall of Night photographs of a distant city at night and flowing water merge with photographs of drawn and painted artwork; galaxies, an eclipsed moon, a flood of pastel stars and movements of abstracted lights cross the dark sky. Thin panoramic strips of photo cloudscapes and landscapes echo painted strips of invented shapes and thick paint.

We see all of these as equivalent 'natural' realities, part of the organic world we perceive and process in our daily lives, both experientially and conceptually. For us culture is a force of nature, not outside it.

Fall of Night refers to oncoming night as an endlessly repeating, endlessly varying daily rhythm. It also relates to the wider question of planetary environmental concerns within which we as a species are poised to destroy or create. We wish to reflect something of the complexity, ambiguity and mystery of our relationship within nature at this crucial point in time.