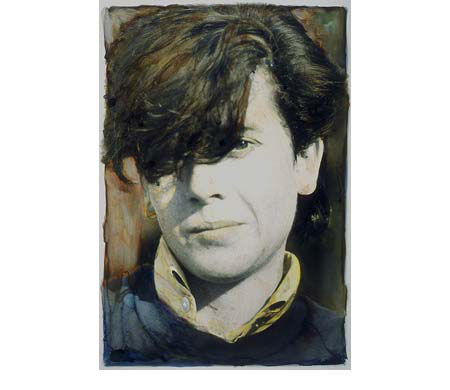 
Commissioned by the City of Elizabeth, with four other South Australian photographers, to reveal the "inner character of our city and its people".

These statements were inscribed in pencil on the mounts of the Citizens of Elizabeth series:

"We wouldn't leave Elizabeth. We've been almost twenty years here. There's nothing like Elizabeth! They're a friendly people. I'm in a wheelchair, and there's so much help given to us. In the shops, you only have to ask and help is given. One thing though, there's no ramps for people in wheelchairs. This is a Trust house. It's ideal for couples. You don't need big houses when it comes to our age. There's very prompt maintenance. You just have to lift the phone. There's no waiting for any repairs."

"It's quiet. It's peaceful. I've got nothing to complain about."

"What can I say about Elizabeth? The people are very friendly. There's a very nice countrified shopping centre. It's getting away from Adelaide. There's not many stores to brag about though, especially the clothing stores. The shopping centre doesn't really service us properly. But when they build onto it in the next few years it should do us well enough then without having to go into the city. What else can I say? I've worked in the city, the people here are much more friendly to work with."

"I've been here twenty-six years. I opened the first Shell station here. There's everything here. Good roads, underground electricity, good public services. The YMCA. Good kind of kids there. There's no need for them to go on the streets. So long as there's no alcohol everything's O.K. Some things are crook, of course. I won't mention those or the Councillors will get me. I shouldn't say it, but it happens everywhere, I guess. The rates go up just about every year. It's the same all over, I guess."

"We've seen it grow. We were one of the first families. Our daughter was the first to be married in Elizabeth, the first to walk the plank! We had one of the first houses the Trust built, and it was quite big. Now we've moved, and the new house is so small you can't swing a cat in the living room. The yard's big, there's room for five trucks, but you can't live in that. It's what you make of it though. It's what you make of it."

"We've just moved here. It's great. We've got a Trust house. It's a bigger house. It's good because we've got lots of kids."

"I've lived here for eighteen years. I came straight here when I was married. I like the country atmosphere because I grew up in the city. I have no intention of leaving here."

"I've lived here fourteen years and it's not bad. A bit dead, but you can't have everything. People complain about the schools, about the rough kids out West. I live out West. It's how you bring your kids up I say. A lot of them don't want a job. My friend, she's got a daughter, and she doesn't really want a job. Her mother doesn't really want her to anyway, because she does all the housework. I've worked at Coles for years, now I work Wednesdays and Saturdays too. A lot of them don't want jobs. They're no worse here than anywhere though."

"Elizabeth is a community with a sense of purpose and clear understanding of the direction in which we want to progress as a city. Our strength lies in our ability to work together to make Elizabeth an even better place in which to live."