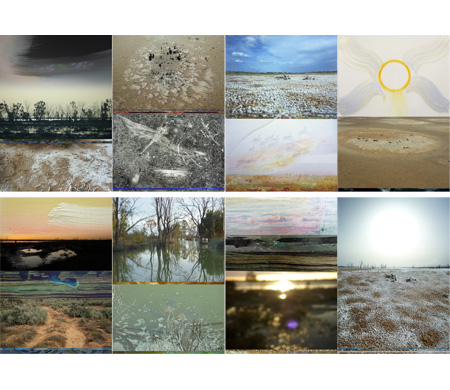 Part of the Mallee [mæli:], Art from a Semi-Arid Place exhibition at the ANU School of Art Gallery 2011

Around Calperum there are salt lakes and red earth and Mallee trees and it is sometimes difficult to tell what is 'alive' and what is 'dead'. Swirls of crusted golden crystals mingle with rising salt and scorpions, dragonflies and whitened frogs. The classic silver/grey of Australian 'dead' gums protruding from muddy edges or scattered over the plains seem as alive in the whole as anything else. Movement and rest, life and death seem indivisibly part of the same interactive whole, balance between them, for the moment at least, poised. In this series I have continued collaborative work with Steenus von Steensen combining photographs and imagery of original artwork, including in this case drawings made at Calperum or directly on my return. The resulting photographs have then been hand painted to a more or less degree.