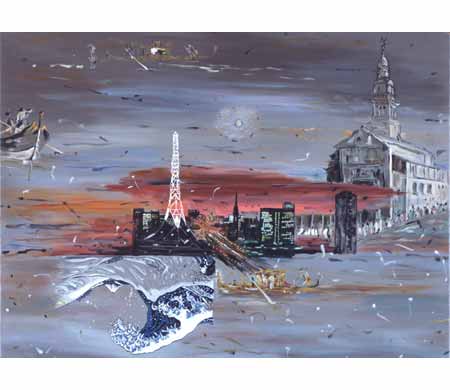 Travels Without My Aunt 1985

For internal adventure, for high play, I followed the patterns of my thought, and watched their motion in paint.
Micky Allan
The Source (exhibition catalogue), Hobart 1986

Seti I, Detail of a Renaissance Landscape, I Clutch My Ideas, Flaming Pearl over the Bay of Naples, Travels without my Aunt, Shipwreck, White Georgias, City in Winter or Spring, Beheading of Louis XIV, The Banksia Men, City in Gold Leaf, Corot and ...

...Travels Without My Aunt was made in 1985 mainly in Paris, where I painted for six months in the Power Institute Studio at the Cité Internationale des Arts. A trip to Naples during this time was particularly significant. Out of its Baroque exuberance and decay I chose complex simplicity.

During its evolution, I made sketches from books in shops and of the things I saw around me; I took photographs to remind me of detail and tone; I read; I thought; I felt what it was like being where I was, in particular; I collected postcards of other people's paintings from the bookshop of the Louvre; I lived my life; I remembered my past work; I broke away. I chose from all over because I felt all over, able to connect with anything, anywhere, should I choose.

Culture was like a force of nature to me, and a delight.

Sometimes I copied other work exactly, sometimes I imagined completely; my identity remained the same.

I drew from the past and from the present, but often felt it was the Future drawing itself into manifestation through me. Imagination was the combining force.

Naiomi Cass
Travels Without My Aunt
Travels without my Aunt Catalogue, Melbourne 1985

John Matthews
The Debut of the Taboo and the Feeding of the Five Hundred
Travels without my Aunt Catalogue, Melbourne 1985