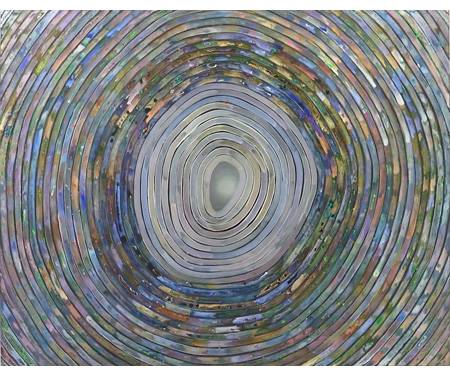 I hoped to bring back at least a hint of gravitas, and to examine notions of mortality and the void as a complex paradox of dark/light, empty/full, life/death resonances without being tied too particularly to a single narrative or to the literalness of an 'illustrated' story. Sea Plunge involved distillation into abstraction and a merging of the symbology of the sea and the Jonah and the whale story. In some ways the story of Jonah and the whale became a contemporary metaphor for the sea. Both represented transformation and change within patterns or waves of becoming, generating a sense of endlessness rather than The End.

I saw this series as an opportunity to examine notions of mortality and the void as a complex paradox of dark/light, empty/full, life/death resonances without being tied too particularly to a single narrative or to the literalness of an 'illustrated' story. I had been particularly impressed by the abstracted mosaics on the Ravello Cathedral pulpit and their dark symbolic voids representing infinity and believe these subliminally played into my decision to choose distilled abstraction as the form of these works. However, I wanted something less regular and more mobile, that combined organic and geometric aspects of abstraction, and focused on the experience within the whale as well as on any outer or symbolic meaning. The use of sustained abstraction, focus on the experience of being inside the whale's body and emphasis on the void (both dark and light) as fertile womb bring significant new perspectives to the traditional narrative.

I wondered what physical structure I could use to embody this barely articulated multilevelled intent, which at the beginning was not overt. Tension between intuition and idea is sometimes creative, releasing into flow, but sometimes works as conflict that blocks and disrupts. For me precise intent becomes diffused during the act of painting and only clearly emerges through the act of painting itself, which constantly adjusts and transforms the idea. I rarely paint from drawings or plans and it was only during the studio process of moving canvases and mixing paints that 'the intent formed' to make a series of concentric circles moving in towards a centre, as a form for metaphorically plunging into the belly of the whale. I found myself surprised by the form this took.

In a spirit of technical and structural experiment which I likened to dropping into the uncharted territory of the sea and simultaneously into uncharted territory in myself, I converged focus into the centre through the repeated use of concentric rings. This became the conceptual and physical structure that was to underpin the whole series. I chose a single large central motif as opposed to small forms in an immense and relatively undefined space to create experiential drama relevant both to the Jonah narrative and the initial desire driving this research to dive metaphorically into the previously unphotographed and unknown depths of the sea. I pooled and spread pearlescent blues and pinks and greens over a black ground in previously untried ways and dropped glitter into the wet curving strips as a way of giving life and activation to the journey.

To make these paintings I laid them down on a waist-high table so that I could pool the acrylic into the circular strips without the marks or indeed the strips running down into each other as they dried: painted vertically on a wall they would have become a mass of drips. Starting at the outer edges of the work, I moved in towards the centre, but changed the corner from which I worked as the rhythmic mood took me. Directional motion had a certain haphazardness so that occasionally a circle had to end because there was suddenly no other end of the same circle to link up with. This became an organic process as I worked towards irregular rather than regular order, in some ways reminiscent of early modernist 'action' painting. With the painting flat and of a fair size I could not step back to make aesthetic judgements or otherwise assess my progress. To a large extent I had to guess what an action might finally look like and was forced to enter more haptic territory of touch and feel. 'Touch' replaced 'view' as central in the process.

It was a delicious sensation to drop glitter-laden paint into painted strips previously laid down, especially with colour already running in them. I chose greens and blues to allude to the sea. Everything was wet, like the sea. The two contrasting textures of paint and glittered paint resisted or dissolved into each other in seemingly random ways. The steady formal and conceptual movement of strips towards the centre gave me structure, but when I dropped glitter out of the thin nozzle of its bottle in either lines or dashes or dots at various heights and rates and pressures of squeeze, I felt I could 'dance' with it over whole sections at once, criss-crossing the basic structure by moving my body to different positions around the table in changing rhythm and pace. The unfamiliar demands of the new material and technique challenged but delighted me. It was all quite fast. The challenge was to hold the creative tension between abandon and control. The delight included the pleasure of play (including the use of 'childish' glitter in 'serious' art, a boundary I love to cross). My method echoed the fluid and liquid nature of the sea, shifting within the consistent structure of its tides, but marrying aspects of both surface and depth.