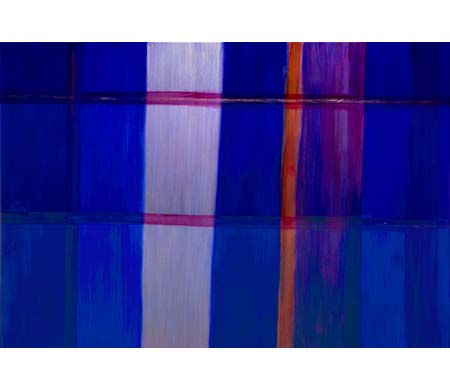 The paintings are anything but muscle-bound - a light and omnipresent singing energy, mercurial and phantasmic, rather than the titanic energy often associated with 'major' work. Yet major the recent works undeniably are - in look and effect and address.
Ken Bolton
High Song/Serious Play, This Australia, including Australia Arts, No. 10, 1987

I want to combine the qualities of a small scale picture (delicacy, intimacy) with the spaciousness of large-scale. I am interested in synthesis, both expected and unexpected. In a seamless connection between such things as
the personal and impersonal
the abstract and the real
the scientific and the esoteric
the poetic and the mundane.
I would like these paintings to be slow to read so that they are paced in time. A balance of activity and calm.

Micky Allan
NEAR AND FAR, NOW AND THEN, in Micky Allan Perspective 1975-1987, Monash University Gallery, Melbourne, 1987